Call it artisan, designer or creative. Or, simply, Stefano. Young and bright parquet floor artisan coming from Marche (has worked in parquet floor field since more than 20 years), Stefano Natalucci is the creator of the Doric Herringbone, main product of Gazzi Mood new collection, ready to become trendy. We met him to birth story of this product and what makes it special.

Stefano, tell us about you: who are you and where come from your passion for parquet floors?

My family was a simple family of Marche hinterland, from a small town near to Macerata and, despite appearances i’m wasn’t born to art. Indeed the first meeting with parquet floors happened during adolescence: when i was a boy, after school, me and my friends wanted and needed to earn money so i went into a shop near my house that was producing wooden floors.

It was love at first sight! Since then i continued to work there every summer, this love has grown with me, slowly, becoming curiosity in all job secrets. It’s interestig, thinking about it during the first day of work, together with that neighbour, i fitted the first italian oak herringbone. 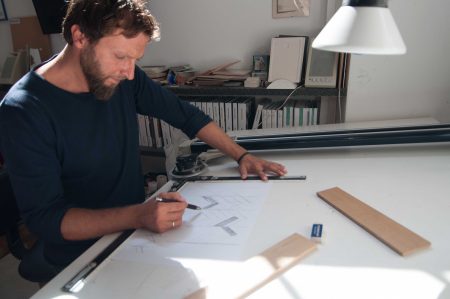 And the Doric Herringbone? Where the idea comes from?

The Doric Herringbone was an intuition. I state thas i’have always been huge fan of designe floors: greeks, carpet tiles, band, girths…things that were realized frequently in the past, meanwhile now are considered obsolete. The shape that has resisted more is the Doric Herringbone and it’s highly demanded during past 5-6 years. During a Doric Herringbone pose i thought to fit strips in a way different from the usual and i did a test immediately…what to say?  The test went through, the circle was squaring. I realized quickly that the result was a very particular and new weaving, not only for me but also for the whole market. After that test i went to my laboratory where i have assembled a 3 square meter with national walnut, using this new schema.

What makes the Doric Herringbone a product so innovative?

Surely the fact that has unprecendent design, never saw before, and just a strong appeal to italian aesthetic tradition, which give to the Herrinbone an original and elegant design. It’s no coincidence that Gazzotti decided to protect it with an international patent! Furthermore, the Doric Herringbone doesn’t has problems neither in construction phase (bacause it’s simple to build both the traditional and the prefinished product), in fitting phase. In fact must be said that the Doric Herringbone simplifies the fitter job due to it’s better simplicity of fitting then a normal italian herringbone.

How did you get in touch with Gazzotti Group? 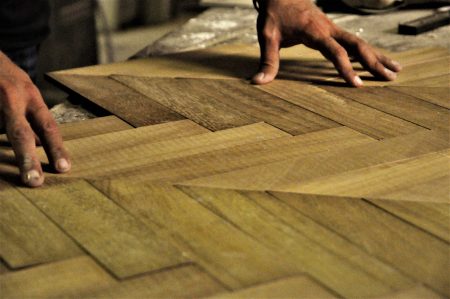 Gazzotti has always been a landmark for everyone who work in the parquet floor world: it’s an historical company which sells parquet floor since 1910 and it’s impossible not to know it. So, when i decided to present my product, my first choice could only be Gazzotti. There i have been welcomed with great enthusiasm and opening, without the usual burocracy typical of many big companies. I was happy to get into a company with a huge know how: Gazzotti has understood that project has potential, has understood immediately the design value. Today i can say that it’s a herringbone in which we all believe in.

Why Doric Herringbone? Where this name comes from?

I have very close ties with my region: i believe that Marche is a wonderful territory with people that are simple and with good hearts. While searching a name for this new Doric Herringbone i wanted a link with it’s birth territory, reflecting the region identity. During ancient times this region was called “Marca Dorica” (how can i forget Dorico Mountain of Ancona?): because of this, Doric Herringbone, that convinced me and Gazzotti.

Do you have any comments on parquet floor generally and it’s development?

I think parquet floor has changed during last years becoming increasingly a versatile element, capable of adaptation to many different needs. I work together with many architect for a long time and happened to cover with parquet wood walls, stairs and to build furniture with it…It’s not simple to satisfy everyone fantasy, but if you have passion, creativity and technical skills at least i have to give a try. Obviously, good parquet floor material is neeed. Not everyone has it.

Are you ready to realize your fantasies with the Doric Herringbone?